Be Mine, Sweet Valentine

My mother was a country school maarm for 7 years in the 1930s.  She grew up in a small town but had never so much as stepped foot in  any of the little country schools dotting the countryside.  She attended what was then, St. Cloud Teachers College in St. Cloud, Mn. for 2 years and was ready to meet whatever challenges lay ahead..... little did she know!  Among the duties:  preparing lesson plans for children who ranged from 1st grade to 8th grade, dealing with male students who were nearly as old as she and in some cases several heads taller.  She usually had the support of parents when it came to discipline and she needed it a time or two!  She also had to get the wood stove going on cold winter mornings, shoveled snow, often walked to and from school.  Teachers in those days stayed with families of students so this could be uncomfortable at times.  She remembered one stay because in the mornings she awoke to ice frozen in the wash basin and slept with her coat on many nights.  She also developed a distinct dislike for rice pudding after eating it for dessert an entire year.  Holidays and parties were looked forward to with anticipation since life was often difficult so entertainment was homemade and involved the entire family participating in school activities. 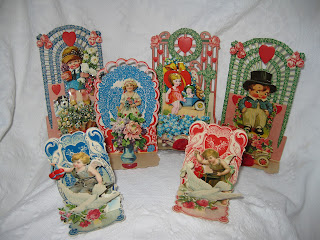 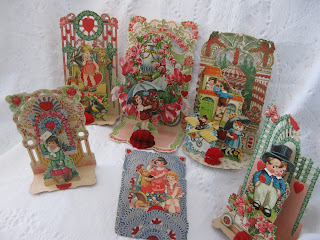 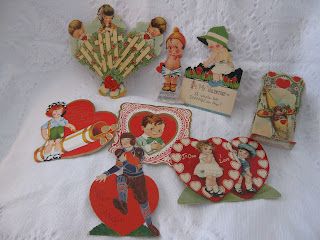 Marion received wonderful Valentines from many of her students and even up to two  years  before she passed away at age 94, she would often take them out of her cedar chest to look through each one  and reminesce about all those children who had a special place in her heart.  Many of the names are familiar to me because I heard about their escapades and personal histories for many years.  Here are a few of those vintage charmers.