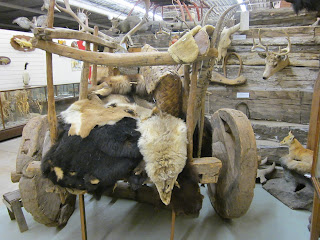 Before there were cars, trains,  planes and automobiles,  there were the oxcarts.  For years fur traders, called voyageurs, who were often of French, Scottish and Indian descent, traveled from Pembina, ND near the Canadian border, through Grant County as they made their way to St. Paul, Mn., a trip of over 400 miles which took 30-40 days.  They also forged trails in other parts of the state as they carried their overloaded carts piled high with furs and buffalo hides toward their destination.  The oxcart was a truly crude but wonderful invention and served the early voyageurs well.  They were sturdy, carrying up to a thousand  pounds and could be pulled by one oxen averaging 15 miles per day.  Only two trips per yr. were attempted; In spring after the grass was tall in order to provide food for the oxen and  a return trip in the fall.  Three or four pulled in tandem could be controlled by one driver and stories are told that as the trains passed near farmsteads, the Metis could often be seen lolling atop a high stack of furs, dressed in colorful clothing, smoking a pipe, singing and waving to the interested settlers as though he or she were out for a joy ride.  The carts could be heard from many miles away, groaning and screeching as they traversed through prairie grass, swamps, up hills and down.  Bear fat or even squashed grasshoppers were used to "grease" the wheels!  They were usually constructed entirely of oak and cost  around $60.00 each.  Use of the oxcarts peaked in about 1858 when approximately 6,000 carts left Pembina for St. Anthony near St. Paul.  Amazingly between 1855 and 1863 it is estimated  $1,500,000 worth of goods and supplies were transported through the Minnesota wilderness!   Visit the Grant County Historical Museum in Elbow Lake, Mn.  to see a real oxcart!
Posted by MEM at 11:24 AM