My paternal grandparents lived in a house that Winnie's parents,  Jacob and Dorthea Triese had lived in previously, and the story goes that they had it moved in from the country about 1915-18.  Over the years there were updates and remodeling  done  that reflected changes in lifestyle due to old age and for convenience.  From the time I was very young I was fascinated by the little objects that graced the corner shelves on either side of the kitchen window----the same type of shelves later appeared in the ca 1940s house built by my parents.  At any rate they were always there and very seldom were they removed for cleaning  while I was in "house" or certainly not for me to play with!  Since I was an only child and only grandchild, I could often coax my elders into granting me a little leeway, but not with grandma's knick knacks.  There was also a large wall length bookcase that was added in the living room which replaced a window on that side of the house.  Here was a multitude of things that included lots of interesting books my aunt collected and brought home when she came to live with my grandparents.  There were unusual covered dishes, fancy cups and saucers and other artifacts that had belonged to my great grandparents.  There were also my favorites----figurines.  A boy minus one hand balancing an apple on his head, a little cart drawn by pigs, a chalkware cat and a truly ugly homemade cloth dog  stuffed with straw which had been used as a toy by my dad when they lived in Pomme de Terre.  It really is in rather remarkably good shape for it's age, but then he spent most of his time playing outside fishing in the river, skiing, skating and trapping.  One of the strangest items is a little rubber doll that looks very much like the painting called "The Scream", due to the loss of the squeaker mouthpiece, I'm sure.  There was also a little hand held game called Cootie which is from WWI era.  Perhaps the oldest items that I have are a little tea set given to my grandma by her parents and a glass stein used by her father, Jacob.  All of these items are now displayed in a built in bookcase in my living room.  Recently a friend asked what I was going to do with all of this stuff. ( meaning what are my kids going to do) My answer was that my sons would have to deal with the issue when the time comes.  For now I'm going to enjoy looking at the treasures and knick knacks and honor the memories of my ancestors. 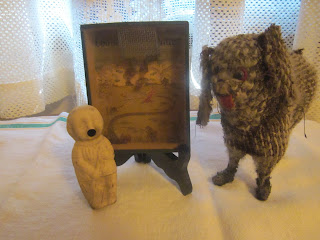 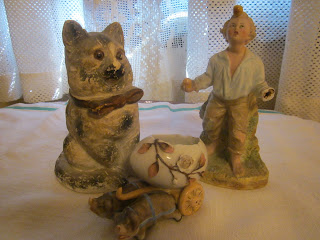 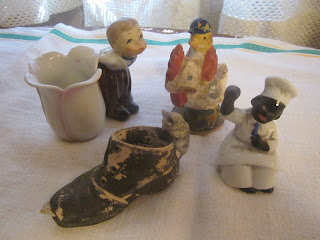 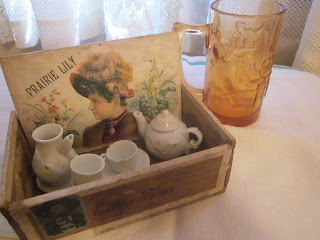