We attended an auction recently at which everything in sight went for big bucks.  I found an old scrapbook which contained a calling card with a name I recognized from my great grandmother's extended family so I was hoping to bring it home.  I actually was able to buy two scrapbooks filled with miscelaneous trade cards, calling cards, pretty pictures of flowers, birds and lovely  children..  Back in the day---whenever that was---creating scrapbooks became a favorite hobby which probably replaced the samplers of colonial times that taught young women the art of sewing as well as a way to decorate one's home.  A fellow in front of me was also bidding on 4 scrapbooks being held aloft by the auctioneer's helpers, but he dropped out and I was able to "score" the bid.  My husband and son were with me and we immediately started paging through to see what wonderous things there were inside and the other bidder was also interested in checking it out, so there we were with our collective heads hovering over the pages.  One item in particular, drew the attention of the guys---a little picture of Curtis Welch, centerfielder for St. Louis showing him in all of his vintage glory in the baseball uniform of the time.  My son, with his smart phone, was able to pull up some info about his playing days and we were quite impressed with his stats.  1889--hit 39 doubles, finished in top 10 in stolen bases for 6 seasons,  49th in career stolen bases.  More can be found in his biographical info on line.  I did find one little tid bit which made me laugh---according to a source, he hid cases of beer behind billboards of Sportsman Park and consumed them during home games. He was born in 1862, made his playing debut in 1884 at age 22, played his last game when he was 31 in 1893.  He died at the young age of 34 in 1896.  Since I am a history buff and love detecting, I started googling to see what I could find about the cards-----and wow, was I surprised!  These little cards were a series of 18 players and were probably meant to be kept in scrapbooks, glue and all. Some are doubles, connected with a paper tab, but even individual ones are worth a lot since they are so rare.  Several auctions have yielded impressive prices. 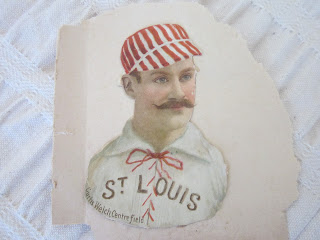