One of my husband's favorite collections that survived his mom's housecleaning after he left for college, are his little Pep pins.  He has continued to purchase the more unusual and harder to find ones when the opportunity presents itself.  He has his original  86 enclosed in plastic coin holders in a three ring binder that is safely stashed in a safety deposit box.  Why, you may ask?  Recently we checked on line after he bought a Pep cereal beanie with 6-8 pins at an auction.   Wow----discovered the selling price on e-bay was over $350.00 for one with 18 buttons........A lone beanie brought $150.00.   Big Boy's Toys are highly saught after and often bring big bucks in antique stores as well as at auctions.  The nice thing about collecting little items such as pins is that they don't take up much space as opposed to often large rusty metal trucks and cars from the 40s-60s!   Originally Pep cereal, introduced in 1923,  was called the "Sunshine" cereal and was competition for Wheaties.  They sponsored the Superman radio series but eventually lost popularity as "tastes" in food/cereal changed.  In 1945 the pins were introduced with 5 series of comic characters from newspapers , as well as planes from U.S. Army squadrons.  In all there were supposedly 90 total pins.  We found an  entire collection of pins  listed on e-bay at $1,099.00.  It is highly doughtful that my husband will ever consider selling his personal collection, but the items purchased at auction----------time will tell.  That might be a topic for another blog!  How do you part with collections? 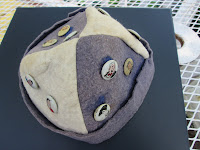 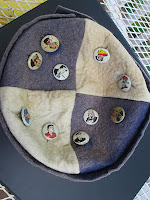 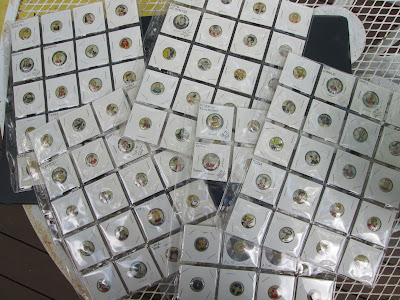