I don't know much about Superman or any of the other super heroes, but sometimes it's good to follow a hunch/gut feeling/woman's intuition?  We were at an auction where there were two tables loaded with piles of vintage pennants, including sports teams, colleges, towns,  tourist destinations----you get the picture.  My husband is knowledgable about anything comic book related and remembers collecting a few other pieces relating to Superman.  I was the one who, mainly out of curiosity, stopped by the tables while waiting for furniture  I was interested in bidding on.  By the time selling on pennants started, I had decided there were several items I was definitely interested in and really thought all of the guys standing around seriously perusing the "goods" would certainly snap up some of the most unusual and oldest of the pennants.  As bidding on the first table commenced, I causually started looking through the piles on the second one and saw a familiar figure----Superman in a pink cape!   I nonchallantly peeled more back and found another :) However the second one was the usual image of the super fellow in blue with a red cape. ! So hurry up and cover them back up so no one else sees them!  Wow, wonder how many bidders I'll have to fight off?  I checked out some other older felt pieces and found several that looked pretty cool.  So what happened when the crowd progressed to "my" table?  Couldn't believe it----I got the bid for only a few dollars each.  Then I ended up buying some of the other older pennants and figured I had gotten a few fun items.  The guys were mainly interested in anything sports related or some of the college memorabelia.  Lucky me---I am completely happy with my unexpected treasures.  If anyone is interested in prices on several of these pennants, follow the link to my business facebook. 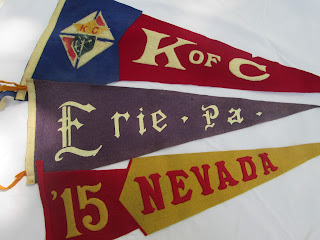 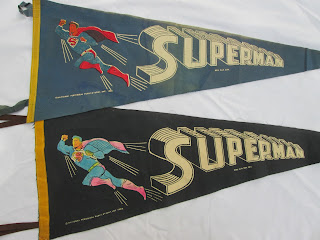