OK, so how many of you see something that just speaks to you and home it goes ?  I came across an item several weeks ago that lured me in several times as I browsed through an antique store; going back more than once to check out details and to really think long and hard about whether I should cave in and buy  the one of a kind tin bathing tub.   As a matter of fact, we arrived home and I decided to call and see if it could be held for me.  So the next morning I traipsed back 60+ miles to check it out again and finally made an offer which was quite a bit less than the asking price.  BUT, after closely  checking the interior, it was obvious that it had rusted out considerably and resembled a sieve  so after questioning the propriator further, she thought that the owner probably would consider my offer since she had brought it in last year.  (this is a seasonal shop so was closed during the winter)  Long story short, the tin tub came home with me along with several other fun items that I couldn't resist!  I tried to find information on the internet as to era and use in order to add to the info supplied by the vendor.  She had found a site after a lengthy search and offered to provide the link, but unfortunately the email I was given for her was returned so wasn't able to contact her.  She did have a note with the tub that states  it dates from the 1860s, probably the Civil War era.  I was able to determine several identifying names:  namely sitz, hip, foot, shoulder tub.  I feel that the painted elements, including flowers, were added at a much later time, possibly to add some pizazz to this little unique piece.  In my imagination I prefer to think of a saloon gal lazing in her cute tub before she goes out to entertain the cowboys with song and dance!  Is this too much of a stretch?  Oh yes, around the edge is a French saying similar to one most of us are familiar with:  Cleanliness is the next of kin to God.  I still think this is a hot little tin tub has a history that shall forever remain a mystery :) 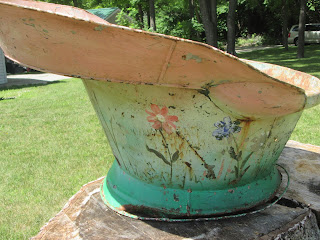 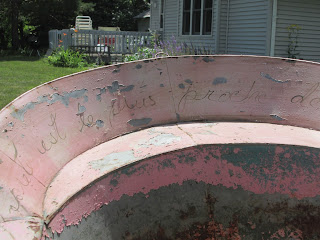 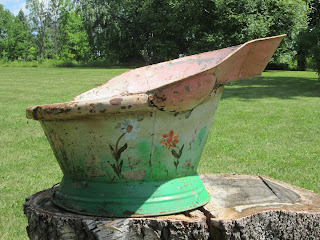