TEAR DOWN THOSE WALLS!

Probably those of you of a certain age remember those famous words of  then President Ronald Reagan, spoken  to Mikhail Gorbachev while visiting the Berlin Wall:  "Mr. President tear down this wall."  Well, not all walls are as famous or relinquish such memorablia as the chunks of that wall did.  However, in my family there have been discovered certain items stashed/hidden behind stone or dirt barriers in old houses.  At one time in the 1980s it was my responsibility to care for the home of my elderly aunt who had gone to live in a nursing home and I was a bit nervous assuming the duties since I lived some 5 hours away.  Granted, my dad lived in the same town, but he, too, was getting on in years and I hated to burdeon him with too many  extra chores.  One spring after a particularly rainy week, I arrived during spring break to find that an entire wall of the basement had collapsed and in the debris of broken tile and dirt we found-----lots of old tin food cans with some of  the labels very well preserved!  Hmmmm, what was this all about?  It is well known that people put old newspapers and magazines behind walls to provide extra insullation for those cold winter months or that sometimes unusual keepsakes were placed between studs for preservation?  But, why save old cans from the kitchen?  My sons and I collected a number of examples of vintage goods to keep on our memorabelia shelves but threw away many that were rusted and dented.  Come to find out, this is not the first example of my familys'  "thrifty" ways:  a few years later, I received from a cousin, an article written in a Tacoma, Washington newspaper in which there was a story recounting a remodeling job in a basement where a number of full bottles of liquor were stashed behind the walls.  The original owner of the home was my grandfather's sister who, with her husband and two daughters moved to Tacoma ca 1890 and established the California Wine Warehouse which apparently thrived for a number of years.  At any rate, it was opined in the news article that perhaps during prohibition, Clara had hidden away a little secret cache of choice bottles of whiskey which were to be consumed 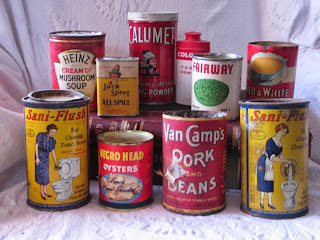 at a later date.  Well, 50 - 75 years later, it was still there!  Not sure how the bottles were disposed of or whether the present owners of the house enjoyed well aged spirits!   By the way, my little stash of kitchen tin cans was found in the same town as the $100,000.00 + comic found earlier this summer------no my tin can collection is not in the same category as aged alcohol or vintage comics but it certainly makes me smile!
Posted by MEM at 1:07 PM