A few years ago I became the proud keeper of a collection of Skookum dolls which had been compiled by my late aunt.  She had traveled many times to Arizona for winter holidays and probably began to bring them home as a remembrance of fun warm times.  Skookums were designed and sold by Mary McAboy after her husband passed away and she was in need of income to support herself.  A patent was granted on Feb 17, 1920 and thus began a career which expanded from a do it yourself artist production until the business was sold in order to accommodate ever expanding demand for these unique tourist souvenirs.  The Skookum can represent several tribes based on the costumes and decorations worn by the dolls.  Their  history can be traced by the materials used in construction as well as the type of fabrics used in clothing;  particularly the shoes.  1913--leather moccasins, 1918---suede on wood or painted designs, 1924---composition and in 1950---plastic became the standard.  Dried apples were used for the first heads, but this became a problem when demand for the dolls increased faster than Mary and her staff of artist women could keep up with the orders and the apples would rot.  The earliest bodies were stuffed with twigs, leaves, straw or grass, legs were wooden dowel rods, eyes were pins, shoes were of  felt, leather or suede over wood. ( After 1948 the shoes were brown.) The early dolls had human hair wigs.   The dolls represented men, women and women with babies in addition to a separate baby attached to a mailing card which were very popular for many years.  The most common facial features show eyes to the right but there are some with eyes turning left and these are considered rare and difficult to find.  The costumes consist of a folded camp or Navajo blanket hugging the body while jewelry, feathers, headbands, beads may be used for decorating the costume.  Just an interesting point----when Mary sold the company the dolls became factory made by an all male staff!   So what happened to a woman's touch? 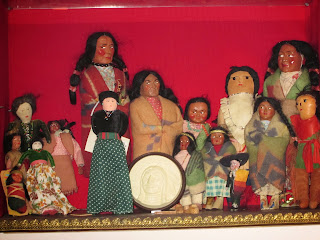 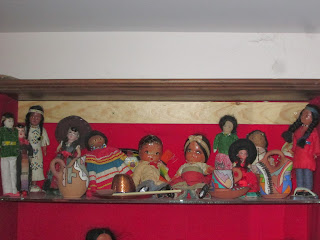 In addition to the Skookums, there were also several dolls which were probably purchased in South America and Mexico and I have added a few of my own selections.  However, whenever I happen to pass the glass front cupboard and look their way------all of those eyes seem to follow me and watch my activity-------hmmmm, what do you suppose they're thinking?
Posted by MEM at 9:39 AM