A biscuit jar, you ask?  What is a biscuit----a bun, a roll .....  The antique biscuit jar I have belonged to my grandmother Winnie and always had a special place on the built in shelves in her living room.  She had many beautiful tea cups, plates and other pieces of china but only one little biscuit jar.  She never placed it on the dining table, nor did she ever offer me a treat from it so I always wondered where it came from or to whom it belonged before it found a home on her book shelves.  She also had a very large china cabinet/closet in which she kept her German made gold trimmed dishes along with clear cut glass goblets and fancy bowls.  But all of the hand painted or colorful porcelain pieces were on the book shelves in the living room.  Hmmmm, I finally decided that she must have enjoyed looking at all of the pretty flowers and designs that decorated those pieces because Winnie wasn't a "fancy" woman and indeed, I always have a picture of her in my mind weariing house dresses with sensible granny shoes, so for her to have something soft and pretty was slightly out of character.  However, she had some interesting hats and they also reside at my house so maybe some day I will have to find some photos in which she is wearing them at a very jaunty angle.  At any rate---back to the biscuit jar.  It might have belonged to her mother or to her mother in law, but neither of those stern looking German women seemed the type to cherish such a fine piece of glassware considering that they both had long journeys in early covered wagons or bumpy train rides before they settled into their new lives.  At some point my grandmother started attending local auctions and I know she won the bid on some very nice items that were being sold by prominent people in the community.  My grandparents had moved from the farm into town so perhaps she decided to treat herself by buying  some old antique pieces which fit into her new lifestyle.
Biscuit jars originated in the 18th century in England and were used to store tea time treats such as scones or tea cakes since this activity was indeed a very big deal in homes at the time.   I can't picture placing Hi Hos or Saltines or gummy bears in these delicate and pretty jars so let's just pretend that they became  early cookie jars,  although  by today's standards,  plastic will be the chosen product.  At any rate, my biscuit jar is in a closed glass fronted cupboard that holds some of my favorite things that include other hand painted  china pieces as well as goblets and sherbets that came from generations of  mothers, aunts, grand mothers and great grandmothers and maybe a few friends. When my grandma passed away, I found that she kept newspaper articles, pages torn from magazines with poems or the odd photo of friends or family so it did hold memories for her, but not biscuits. 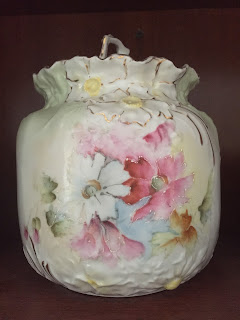